Put Some Power Behind Your VLANs With PVLANs 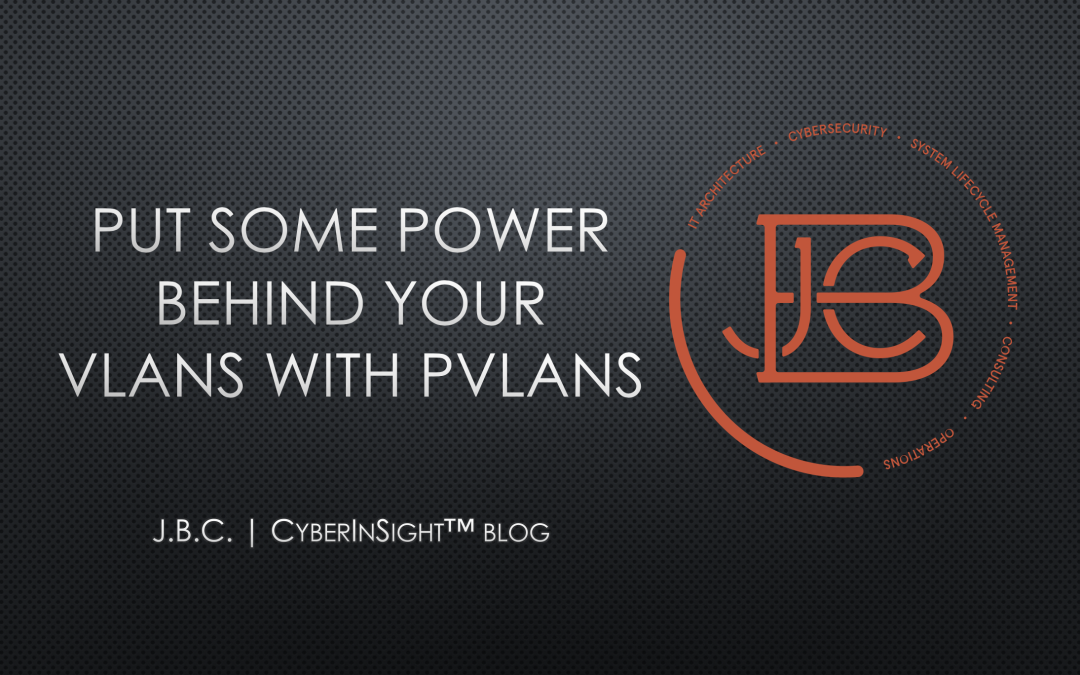 ​I like to approach designing networks by starting with a solid foundation from the beginning. In my eyes, this mean utilizing network segmentation to its fullest. Intricate rule sets, host and network based protections, and real time threat detection all have their place, but architecting network segmentation in a protective manner sets the tone for everything else that is built on top of it. Today, I want to focus on a very easy but effective way to do this at the layer 2 level with VLANs and more specifically the granularity and protections that are granted by utilizing Private VLANs (PVLANs).

The three types of PVLAN ports are promiscuous, community, and isolated:

Below we’ll look at a few high level examples of the various types of configurations you can see with PVLANs and the expected communications between them. The first however, is not a PVLAN example, but instead what you would normally expect with a regular VLAN configuration. You have a layer 2 switch that all hosts are connected to with an uplink to a firewall which is acting as the gateway for VLAN 100.

The first PVLAN configuration is depicting the same network, but now we have implemented PVLANs. A singe host (Server A) and the gateway are in the primary VLAN (VLAN 100) and have no secondary VLANs and are thus promiscuous ports. Server B and Server C are in a secondary VLAN (VLAN 200) which is configured as isolated. You’ll also notice that Server B and Server C state they are in VLAN 100, 200. This is to show that they are a member in the primary VLAN 100 and the secondary VLAN 200.

Configuration 2 instead swaps out the isolated secondary VLAN and implements a secondary VLAN (VLAN 300) configured as community VLAN consisting of Server B and Server C.

Configuration 3 takes the setup in configuration 2 and also adds back in the secondary VLAN (VLAN 200) which is configured as an isolated VLAN consisting of Server D.

Lastly, Configuration 4 adds in a new secondary VLAN configured as a new community subdomain. This new community VLAN is VLAN 400, and consists of Server E and Server F.

My goal with the above information was to try to explain at a high level how PVLANs work. When implemented correctly with some strategy in regards to required data flows between systems, they can be used as an effective access control measure. Having an understanding of what devices really need to communicate with each other in your environment while implementing PVLANs (coupled with further network segmentation) can provide some stringent controls against lateral movement within an environment. In part two, I’m going to go a bit more in-depth into the configuration, use cases, and some interoperability concerns when implementing this PVLAN technology.

Some good resources on the topic of private VLANs: