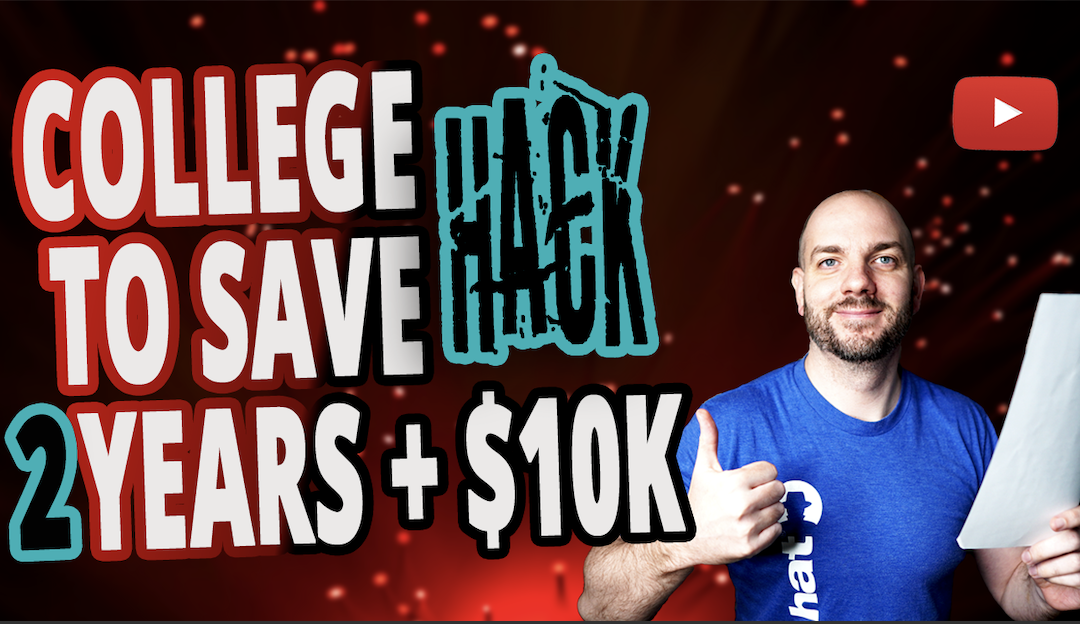 Do you want to know how to hack a four-year degree in two years and save yourself tens of thousands of dollars? This topic excites me because it’s something that I try to share with people as much as I can. I’ll show you a few specific hacks that you can use to both save yourself years and tens of thousands of dollars when you’re trying to go after your undergraduate degree.

A little backstory here: I did my undergraduate degree in Computer Information Technology, and I did that degree in two and a half years. Now, that is not normal. A lot of people are surprised to hear that and how I was able to take a full load of classes and then also earn additional credits towards my degree. I was able to compress the normal time period of four years down to almost two years!

So the main hack, the main secret to all of this (I’m shocked whenever I have conversations because a lot of people have never heard of it before) is CLEP tests. CLEPS are standardized tests, and anyone can go and take these. They cover a wide variety of subjects but are mostly classes that fill your core level requirements. They cover information that if you were an A or B student in high school, chances are you probably already know and would be able to pass tests covering these topics.

They offer 34 different tests covering everything from English composition to mathematics, various types of sciences, social studies, history, languages, and arts. Pretty much all the basic 100 and 200-level classes that you would normally take to fulfill your core requirements. The tests generally consist of about a hundred questions and take around an hour and a half.
The passing score is normally somewhere around 50 or so and that’s on a scale of 20 to 80. Each of the tests is normally somewhere between 3 to 6 credits. The number of standardized test credits that each college will
accept differs between institutions.

There are so many well-known universities that take CLEP tests – ones that you know! Honestly, all you have to do is go on Google and do a search to see which universities accept CLEP tests. Most of them do. While that is true, one thing that you need to be careful of and you want to ensure is the number of CLEP credits that they will accept. You don’t want to go and start taking a whole bunch of CLEP tests and then find out that your university is only going to accept three or four classes worth of them.

This seems great, right? So, what do you have to do to take these? First off, most libraries have study guides for these tests already, so you don’t even need to buy anything. If you want to study for a particular test, they do give you a list of various types of other study material. You can take the tests at various testing centers or your local college or university.

One of the best parts, and what helped me out a lot when I was going through my degree program, is that if you’re in the military active duty, reserves, or guard, you can take these tests for free! All you have to do is go to your Education Center. I used to go there so often I became best friends with the lady that administered the tests. I would go every single week and take a new test. For many of the tests, I would just show up, take the test, and wasn’t even doing any studying.

Now, as I said, you can go to the library and you can get the books to study there. They also have a CLEP test study guide book going over different types of example exams that can be ordered from the CLEP website (check out the links in the resources section below). This book is $25 and it covers all 34 tests.

For myself, I ended up getting about 60 credits from different CLEPS that applied to my undergraduate degree when I was attending UMUC. I put up a few screenshots over here of the grade or credit reports showing you the different classes that I took and how many credits I got for each of them.
There are a few other types of tests that are very similar to CLEPS that work in the same way and those are the Dante’s (DSST) and Excelsior University exams. I believe the DSSTS are only available to military members. Excelsior, on the other hand, is open to anybody.

When it comes to prices, as I mentioned before, military folks have a very good situation here and should take advantage of them because it is free- as long as you pass the first test. If you fail (and this is applicable to everybody, not just military members), you can’t take the test again for three months. For military folks, you don’t get your retakes for free; you do have to pay what everyone else does ($89).

So hold up and think about that for a second. I believe the average cost for a three-credit class in the United States last time I look is something like $1,500 per class. It’s nuts! Do you really want to spend $1,500 when you can go and take the test for $89, get those credits, and move on to the next classes? For pretty much my whole degree path, I was taking the classes that were aligned with my major, but taking the CLEPS so I wasn’t worried about having to take the base-level classes. Instead, I was able to focus on networking and computer science, and cybersecurity- things that were interesting to me! I was able to accelerate that path and get my degree right in time with me getting out of the Air Force and getting my first job in the civilian world.

Let’s do some other really quick math here: the average college degree is, let’s say, $70,000 (and I think that’s on the low end), taking into account in-state tuition in public universities (not necessarily private ones and out-of-state tuition because with that it’s probably well over $150,000). If you’re able to take a quarter of those classes or 30 credits, how much is that going to save you? Probably about $18,000! If you’re able to use more CLEP credits than that, how much money and time savings is that going to be for you? I even know folks (Marcus Carey) who used this process for almost their entire degree!

It’s amazing to me that many students are unaware that these tests exist, that they’re inexpensive, and widely available to go and take them. All it takes is a little bit of research and you could end up saving yourself quite a bit of time and effort. It basically allows you to accelerate your degree path to get your foot in the door in the industry sooner while also reducing your student loan debt.

I put some resources down below for you to dig through. If you have any questions about this, I’m more than happy to share my experience of when I was in the military doing the standardized tests, accelerating my degree plan, and getting out without having any college debt. All these are benefits of using CLEPS and other standardized testing.

Understanding the basic of CLEP tests

How and where to register